This project has now finished and the video is being made. Please note that this video will be released after our audio release of 'Notes For Our World' by Gareth Malone in order to align with Gareth's schedule. We will be in contact with all participants in good time before the video release so that everyone can join us, and the video will remain on YouTube after the premiere.
Stay Tuned!

You'll recognise Vuelie from the opening of Disney's Frozen - and now you can learn to sing it! Join us over 3 weeks of online rehearsals with Frode Fjellheim, a Sámi composer and musician from Norway, for a unique opportunity to sing a new mixed voice arrangement of this magical piece. You'll also get the chance to learn to yoik - a traditional Sámi style of singing - with Frode Fjellheim himself.

Vuelie has a children's voice part, so we'll also be running a free open session especially for young singers (ages 4+)! Click here for full information and FAQs about the Vuelie children's choir.

Everyone is welcome, regardless of previous singing experience, and we're always open to new members. Don't miss our first project of 2022 - sign up now! 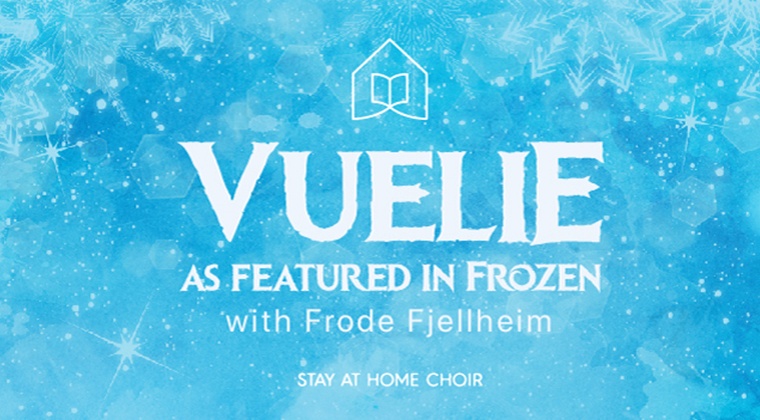 We believe that music should be accessible to all. Through the generosity of our artists, partners, and Stay At Home Choir members, we offer sponsored places on each project. This means we're able to support singers who otherwise wouldn't be able to take part.

The waitlist for this project is now closed. Please email us at contact@stayathomechoir.com if you need any further support or information.

Norwegian yoiker and musician (piano and synthesizer). He is best known for his band Transjoik and as the composer of the 2002 song "Eatnemen Vuelie", which was later adapted to become the opening musical number of Frozen.
A distinction graduate from the Royal Academy of Music Vocal Performance Masters, Jamie is the Baritone & Vocal Percussionist for the 5-time Grammy award winning group The Swingles and co-founder of the Stay at Home Choir. An experienced workshop leader and conductor he has worked with National Youth Choirs of Great Britain, Welsh National Opera, London Youth Choir, and The Sixteen.
Tori Longdon studied the Royal Academy of Music, where she was awarded a distinction for her MA in Choral Conducting. She is now in demand as a vocal coach, adjudicator and conductor on BBC shows such as Songs Of Praise, and directs a number of ensembles around London including the Covent Garden Chorus. She currently holds the post of International Music Director for the Alpha Choral Courses in Shenzhen, China.

So different from anything we've done before. Thank you Frode for introducing us to joiking.

So different from anything we've done before. Thank you Frode for introducing us to joiking.